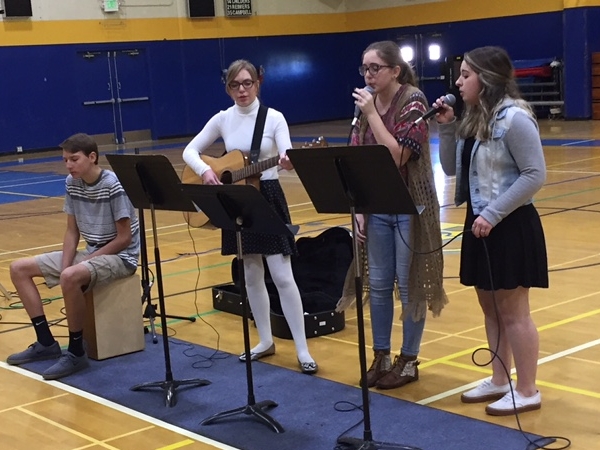 In December our secondary campus unity groups each chose a way to serve and minister to others to put into action our spiritual focus this year of, Find a need - fill a need - He's all we need.

At the core of our Christian character education is the mission that our students learn to be servants to others.  "The unity group ministry day is a great way to instill that value in our kids," Principal, Steve Finlay notes.  "Several of the students commented on what a positive experience they had as they 'gave back' in various ways.  One student, after giving a gift card to a fast-food franchise to a homeless person later remarked with a smile on his face, 'That felt so good!' His comment summed up the experience of many."

What are unity groups?  "Unity groups are small groups that allow students to meet in a more relational setting.  Each group has an adult facilitator, and school-wide themes are discussed, with Mr. Daugherty, our chaplain, giving guideline Scripture and talking points.  The students meet together for worship, and afterwards go to their unity groups around the campus."  - Steve Finlay

Why does Faith Christian have unity groups?  "The Unity Groups are a time for students to be more active in the chapel ministry.  It is a time for them to ask questions, give their perspective and opinions.  More importantly it is a time for them to be personally encouraged by others in their small groups.  It is also a time for the groups to work together to be ministers, not just receivers of ministry."  - Rick Daugherty, FCS Chaplain

The unity groups were originally an idea of the students requesting a time in which they could meet in small groups.  The teachers work together to organize the unity groups which meet on the first Friday of each month.  This inaugural unity group ministry day yielded many positive results and we will hold another time like this in the Spring semester.  As to what's next?...We're excited to see how our students will find a need and fill it with God's power and for His glory!